'Tis the season for Gingerbread Ale!

I was actually leaving the liquor store, on my way out the door when my girlfriend looked at a display case and pointed, asking "What's that?" If it weren't for her asking, I would have never picked up this beer. I found the Vancouver Island Brewery Dough Head Gingerbread Ale (Alc. 5.5%).

I was really excited to try this beer, mainly because I don't think I've had a gingerbread ale from anywhere that knows what they're doing. Let me tell you, the guys at V.I.B. are definitely brewing in the right direction.

It pours a dark amber colour, and has about a half-inch of head that dissipates quickly. When you raise that glass to your nose to give it a good whiff, you can pick up on all the smells that smell Christmas. If you're not into flavoured beers, well then this isn't for you. However, if you like gingerbread, or if you just love the smells of Christmas thrown into a beer -- you gotta try it. The smells consist of ginger, nutmeg, and cinnamon, with a bit of something else. I'm not the best cook, nor do I work with these spices a lot, but there's something other than those three. 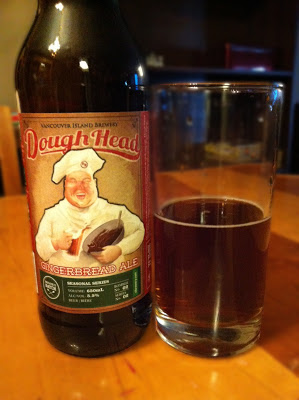 Taking the first sip, I surprisingly tasted cloves along with the ginger, nutmeg, and cinnamon. The mix of the ingredients in this beer serves it well, as it almost tastes like I'm drinking a beer gingerbread house, minus the icing. This beer's taste immediately reminded me of baking, the holidays, and whatever other good memories I have associated with the holidays.

A tip for this beer is to let it warm up a little bit. I'm not talking room temperature, but once it's fully chilled in your fridge for a couple of hours, let it sit outside for about 20 minutes (8 to 12 degrees Celsius) before taking your first sip. It allows more of the flavours to come through, and overall the beer becomes more balanced and more delicious.

If you have that someone on your Christmas list and you don't know what to get them, try giving them the gift of the Dough Head Gingerbread Ale; it's available at BC Liquor Stores in a 650mL bottle for $5.50. I got mine at the Northgate location near Lougheed Town Centre.

Overall, this beer definitely has a well-balanced palate of Christmas blended spices, but if left too cold for too long, becomes slightly unbalanced and can lower the score a bit. When chilled too long, the spices can overpower the taste of the beer. However, serving it at just the right temperature will allow the flavours to work well together.

However, there may be something missing from it, but I can`t quite put my finger on it. Because I can't figure out what it is, nor does it bother me that much, this is still quite a respectable, flavourful, and solid brew.